The archive of the audio interview I gave on May 21st to the VoIP Users Conference (VUC) is available at:

You can either download the MP3 for later listening or play the show directly in the browser.

It was an enjoyable show that went for pretty much the entire hour.  We talked about the Seven Deadliest Unified Communications Attacks book, UC and VOIP security in general... and, well... a good number of other interesting side topics.  I think you'll find it an enjoyable listen.

Many thanks to Randy and the whole VUC gang for the chance to go on the show and talk about the book.

Live interview Friday, May 21, 1pm US EST on VoIP Users Conf about the book

This Friday, May 21st, at 1pm US Eastern time, I'll be live on the VoIP Users Conference call talking about the Seven Deadliest Unified Communications Attacks. We'll be talking about the book, the attacks against UC systems and strategies to protect against those attacks. Based on past VUC calls, I'll expect it to get highly interactive :-)

The VUC is a long-running weekly conference call on Fridays typically at noon US Eastern time but with occasional sessions starting at 1pm as well. Randy Resnick is the host of a fun gathering of people interested in VoIP and IP communications. Many of the folks work with Asterisk and other open source tools and are generally trying to push the boundaries of what can be done with VoIP. I've been on a number of shows in the past as both a guest and a regular participant and enjoyed the conversations.

If you are able to participate live on Friday, you can join in the discussion and ask me questions during the session. You can call in on any of these numbers:

The VUC uses a HD audio conferencing bridge from ZipDX so if you call in via Skype or SIP (with a wideband codec) you'll be able to enjoy the call in high quality audio.

If you can't attend the call live, the session will be recorded and available from the episode web page for later listening.

I look forward to talking to some of you there.

P.S. The VUC also uses IRC and will have a backchannel going on "#vuc" on freenode.irc.net (a web interface is available if you don't have an IRC client handy). 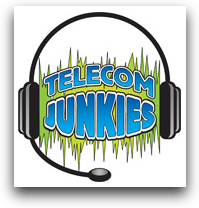 Yesterday the folks over at The Voice Report posted a Telecom Junkies podcast where host Jessica Gdowski interviewed me about the book. As Jessica says in the intro, I'm a "veteran Junkie" in that I've participated in several previous podcasts including an interview with Robert Moore who was convicted of hacking into VoIP systems.

In this interview, Jessica started out asking me about why I wrote this book and how it is different from all the other books out there. We went from there into discussing the parts of the book, the areas I thought are of most concerns, solutions out there and much more. And at the end she had a little contest offering...

You can listen here.

It was fun to do and I thank Jessica for the opportunity to talk about the book. More interviews will be coming in the weeks ahead....

P.S. And if you are interested in interviewing me on your show or for your web site, please contact me.